Some of you, from my YouTube video  www.youtube.com/watch?v=mM7TX6Y6f9s know that I had a lightbulb moment one afternoon in 2009 while watching Oprah.  There on the screen emanated Carnie Wilson, looking thinner, happier, and more radiant than I’d ever seen her. When I learned that Diamond Dallas Page and his DDPYOGA helped her attain such an achievement, I did some immediate Googling and found the Team DDP Yoga site, the DVD’s, and the wonderful online journal of Terri Lange, Godmother of DDPYOGA. I also found Arthur Boorman’s  famous transformation video.  To call it remarkable is an understatement.

For many years, Arthur was as overweight and out of shape as I was that cold winter day three and a half years ago on my maiden viewing of “Arthur Walks.”  But Arthur had more than excess weight plaguing him. He was a disabled American veteran who walked with canes.  For 15 years they were his constant companion. But somehow, through this magical, mystical system known as DDPYOGA, Arthur was out of the canes and sprinting at the end of the video.  That testimony, more than anything else showed me what was possible. I realized this was no ordinary ‘before and after’ smoke and mirrors gimmick.  Arthur made it clear throughout the video that he got what he got because of the time and energy he put into the workouts. There was no manipulation, no hollow or outlandish promises, and no suspicious time lapses.  Arthur put it out there plain, for all the world to see.  That’s Arthur:  no fluff, no gimmicks. He gets to the point, tells it like it is and above all, gets the job done.
You may have heard that Arthur Boorman has exploded into nationally-known status thanks to his video going viral and a subsequent appearance on Good Morning America last week.  So, whether you’ve known about King Arthur for years or have just discovered his inspirational story, tonight’s your chance to hear him live and even ask him a question (if you get in line quickly enough). He’s the special guest on  DDP RADIO at 9 p.m. EST tonight. DDP, Robert, Sparky, and I will take your calls and chatroom questions and hear from Arthur himself what keeps him motivated and in warrior-form after five years of the DDPYOGA lifestyle.
We’ve got a great show lined up this week but, as always, the shows are only as good as YOUR participation, so get in line early with a question or a comment, either via the chatroom or by phoning in to be a part of the show.  Give us a call @  347-994-1216, and tell us how you are doing, or give a shout out to that  Team DDP YOGA member who has inspired you.
Don’t forget that if you miss the show live, you can always get every show that’s ever been done, on demand, from the DDP Radio archives on  BlogTalkRadio. 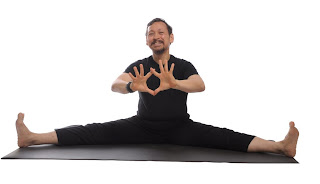 By Stacey Morris
0
If You Bake It, They Will Hum…
Greens and Beans