Disguising the appearance and texture of a vegetable is the underlying point of a recipe like this if you’re not especially fond of little green fronds. Believe me, I couldn’t have dropped 180 pounds and kept it off for nearly five years if I didn’t become more amenable to subsisting on more cauliflower, cabbage, kale, and spinach…I’m much more cooperative than I was a decade ago…but I still need coaxing.  Thankfully, the January issue of O magazine gave me a brilliant idea and I ran with it:  Spinach Pesto.

That’s pesto as in, no basil, ALL SPINACH. You’d think that as a passionate home cook, healthy eater, and recipe developer, this would have occurred to me long ago. But no matter, I had a 10-ounce tub of fresh spinach in my crisper drawer just waiting for a purpose. I loosely followed the O magazine guideline and came up with this emerald-colored and surprisingly flavorful sauce which I paired with mung bean pasta. I’ve been having a love affair with the simple, pale-colored mung lately:  Our New Year’s Day pancakes were made with a gluten-free flour blend that included mung flour, coconut flour, and blue cornmeal, and two days ago I made a massive pot of mung  bean soup. Mung pasta is a little on the chewy side, but its upsides are many, including the fact that it’s gluten-free, heavy on the protein and fiber, and rich in iron, while being light on sugars and simple carbs. Double win!
Spinach Pesto

1 10-oz. tub prewashed baby spinach
4 cloves garlic, peeled
1/2 cup grated Peccorino cheese (made from sheep’s milk)
1/4 cup lemon juice
About a cup of extra virgin olive oil (this amount can vary, what you want is enough oil to make a slightly liquidy paste; something that will emulsify easily over pasta)

In a food processor, blend ingredients together and pulse until smooth. If your food processor is medium-sized like mine, you’ll have to do the pesto in several batches. Don’t be alarmed at the mountain of spinach…it chops down to nothing in no time. When first batch is done (you don’t want to overcrowd the food processor), scrape pesto into a small mixing bowl and start second batch. Serve immediately over pasta and refrigerate any excess. I recommend storing in an airtight container, where it will keep for a few weeks. This is also fantastic on toast or a toasted bagel.

Now isn’t THAT a fabulous way to get the greens? 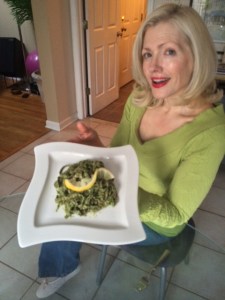 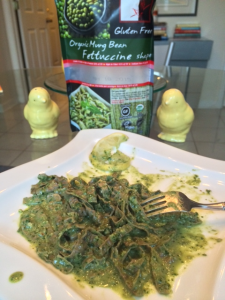 Unconventional, but I got my spinach today… 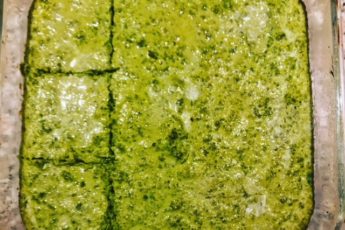 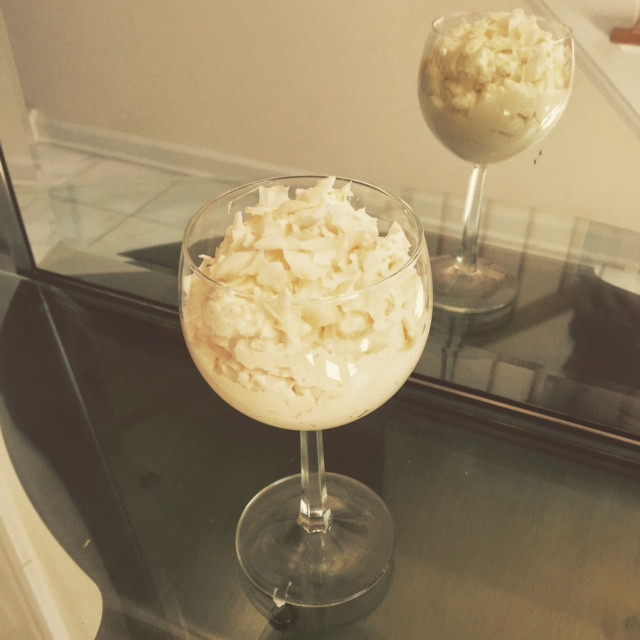