It’s the tail end of the year. The final grains of sand from December’s hourglass are cascading out of sight. This is when I tend to reflect. On how profoundly different my life is now than it was in December 2008.

Three years ago I was extinguishing my life force and any traces of vitality with lumberjack-sized portions of food. My body was in a state of functioning exhaustion for two reasons: it was continually digesting food, and the foods I sent down the hatch were off the charts in their caloric upper-cut of a punch. At the top of the list were copious amounts of potato chips. And not just any old, off-the-shelf variety. These little lethal weapons were cooked in lard and available only in a certain county of southern Pennsylvania. That meant I had to mail order them from the factory if I wanted my fix. The UPS delivery men and women became very familiar with me thanks to the frequency with which they hauled the cumbersome cardboard packages up the stairs to my second floor apartment. The deliveries were the shape and size of a mini cardboard coffin (interesting, huh?) and plastered with shiny red and white stickers that read ‘FRAGILE.’ Curious how those stickers accurately described the contents of the box as well as my then-state-of-mind. It didn’t take much to send me careening into the kitchen to blot out whatever it was I wanted to blot out. Sometimes, there was nothing really to run from. Eating in such a blind and destructive way had simply become a habit, and as I deliberately looked the other way, my weight crept to an all time high of 345 pounds.

Life at such a size had become profoundly difficult at worst, uncomfortable at best. There were obvious physical tasks that were demanding like climbing a single flight of stairs, getting up from the couch, and trying to negotiate a crowded restaurant without knocking over a few tables or chairs with my hips. Even sleeping, the thing that should have been a breeze, was frought with awkwardness. And then there was the wardrobe: black lycra or black lycra. It was my only choice and I wore it daily, even in crippling heatwaves (here’s something that may shock you: a 300 pound woman swathed in black is generally not good company when the mercury spikes above 65 degrees).

As unhappy as I was, I made peace with my life situation. Food was too insidious an addiction to come to grips with, and finally, after years of believing society’s bigotry, the revelation came down from above that my worth as a human being had zippo to do with what the scale said. So there I was at the end of 2008, in total acceptance of the fact that I’d live the rest of my life with an unshakable addiction and an irrevocable relationship with Lane Bryant.

Mystics and sages have said that it’s the moment we finally surrender that Life or Serendipity or The Great Mystery can finally step in and start to amend a seemingly hopeless situation. 2009 had barely begun when I realized the mystics and sages were correct. Two guiding lights, Diamond Dallas Page (http://www.ddpyoga.com/ ) and Terri Lange, materialized in my life to show me a way out of the woods. I was ready to listen to their advice, follow it, and mix it with my body’s innate wisdom to create a way of living that both strengthened and lightened me, on more than just a physical level.

Yes, the addiction was shakable afterall, but only after I came to terms with two things: 1) I wouldn’t delude myself that being at a lower weight would be a golden ticket to happiness, and 2) I would agree once and for all to face the demons that continually sent me careening into the kitchen.

It took years and I was determined not to rush the process. I wanted a house of bricks. And three years later, I have one. Becoming who I am today was and is an ongoing process that required getting to know and like foods that enhanced my energy level and health, paying attention to or more accurately, FEELING the emotions that are part of the human package, and being physically active on a regular basis. This may not sound like your idea of a good time but I swear, for the most part it’s all been pretty enjoyable…even the challenging days. As Terri Lange told me, marching IN the parade vs. being on the sidelines means taking the good with the bad. Sometimes it feels gloriously exhilarating to be in the middle of it. Other times I get rained on or limp along because of blisters. And just when I think I’ve signed up for a little more of life than I bargained for, I remind myself not only that blisters heal, but I’M IN THE FREAKIN’ PARADE.
Last week I opened my front door to find a cardboard box delivered by UPS waiting for me, adorned with ‘FRAGILE’ stickers. I felt a momentary and disturbing flashback to the days of hovering half-awake in a potato chip coma, then remembered that it was an order for Lucini organic extra virgin olive oils and balsamic vinegars.  It would be accurate to say that three years later, I exercise a little more discretion when it comes to sending food down the hatch now. http://shop.lucini.com/Extra-Virgin-Olive-Oil/c/Lucini@OliveOil I tore the box open with delight, admired the gorgeous deep green of the oil, then made a goat cheese omelet with Lucini’s lemon-infused olive oil.

So with only a few grains of sand remaining, I’ll close out December 2011 with a major expression of Gratitude to Dallas Page, Terri Lange, and so many amazing members of Team DDPYOGA (Jamie, Richard, Rez, Jay, Sparky, Doug, HD, Robert) who give of themselves and uplift others on their journey back to a fuller life. 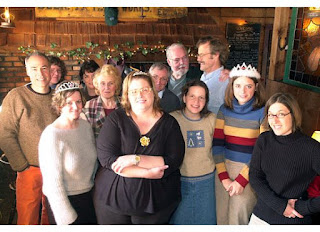 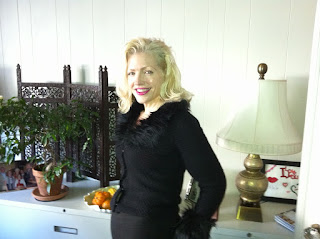 I still wear black…but now it’s a choice, not a mandate

By Stacey Morris
0
Masala Farm: An Inspired Life
Flavor Vs. Freedom: What’s It Worth?