Don’t ask me why, but sometimes I buy things and set them aside…for ages. I suspect it’s probably tied into my response to fear of the unknown. I’m not familiar or comfortable with something so I simply ignore it. Case in point: a bag of almond meal (also known as almond flour). I bought probably circa 2011. It’s survived three moves and each time I thought of leaving it behind but some little voice told me not to give up on the almond flour. Why, there entire cookbooks and websites devoted to the practice of alchemizing almonds (ground to a sandy flour) into breads, desserts, and entrees of all kinds. Despite the wealth of resources, I decided yesterday to make my first round of baking with almond flour a full-blown adventure and not follow a recipe.

I’m constantly in recipe development anyway, so what the heck? And after years of recipe blogging, writing food articles for newspapers and magazines, and at long last coming out with my first cookbook, I felt OK about walking the baking tightrope without a net.

So here goes, my first almond cake. The original plan was to frost it with coconut cream frosting, but full disclosure: I was viably hungry from a workout when it came out of the oven and couldn’t wait. And in retrospect I’m glad because it’s actually divine on its own. Before you delve into your own version of this, let me deliver a few disclaimers. First, this cake is not a looker. It’s just not. But photogenic wasn’t what I was going for. Tasting good was paramount, as were clean ingredients. Part of the almond cake’s lack of sex appeal is its flatness. What can I compare it to? A thick cookie perhaps. But it’s not lush and towering like cakes on TV are. I’m no food scientist but it seems logical to me that those fluffy, tall cakes loaded with baking soda, baking powder and other leavening agents are both a) pumped up with air and b) a mirror of what happens internally after you eat a slice. Give me a flat, unleavened cake and I’m happy. The flavors are more concentrated and if you’re ok with it not looking like a cover model cake then it’s not a problem.

That said, this cake makes an excellent snack, light dessert, even a scrumptious breakfast accompaniment to coffee. And though this may be obvious, I’ll say it anyway: unlike a pastry or traditional slice of cake, this is healthy. Not necessarily low in calories, but the ingredients are overall clean and whole. The one deviation from purity: I threw in a box of sugar-free pudding. I do this occasionally to sweeten desserts since going off sugar more than a year ago. The majority of the time I use Stevia, but this was one of those sugar-free-pudding baking occasions. If that turns you off, use either a box of sugared pudding or about a half-cup of sugar, agave, or coconut palm sugar instead.

Not knowing just how flat this would turn out, I poured the batter into two round cake pans. It would have worked fine in one, so my advice is use one round cake pan or a square brownie pan. Hope you enjoy – bon appetit!

Process all ingredients in a large food processor. Or you can place them all in a large mixing bowl and beat with an electric mixer until smooth. Take 2-3 tablespoons of coconut oil and place it in the baking pan. Put in the warming oven for about 3-5 minutes, or until melted. Carefully remove from oven with potholders and swish melted oil around the pan, coating the sides as well. Pour batter into pan and bake for 25 minutes. Turn off oven and leave cake in the oven another 20 minutes. Remove from oven and cool for five minutes before removing from pan. Cake may need a little loosening with a spatula. 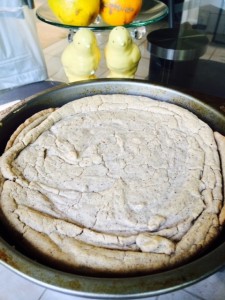 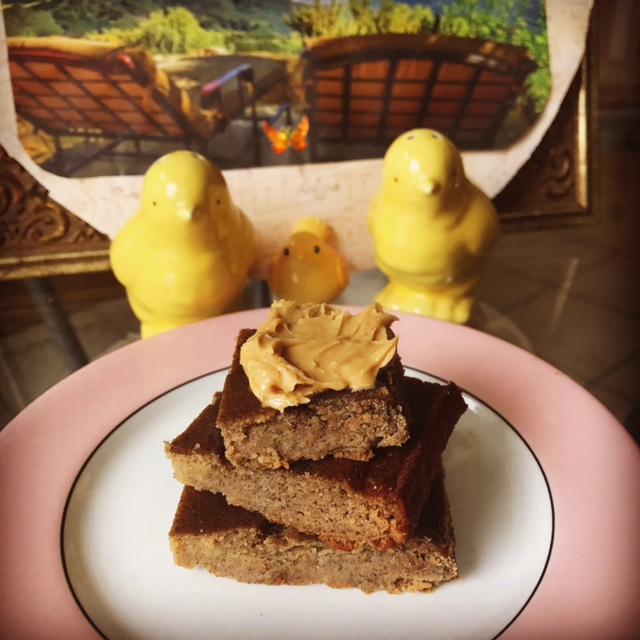 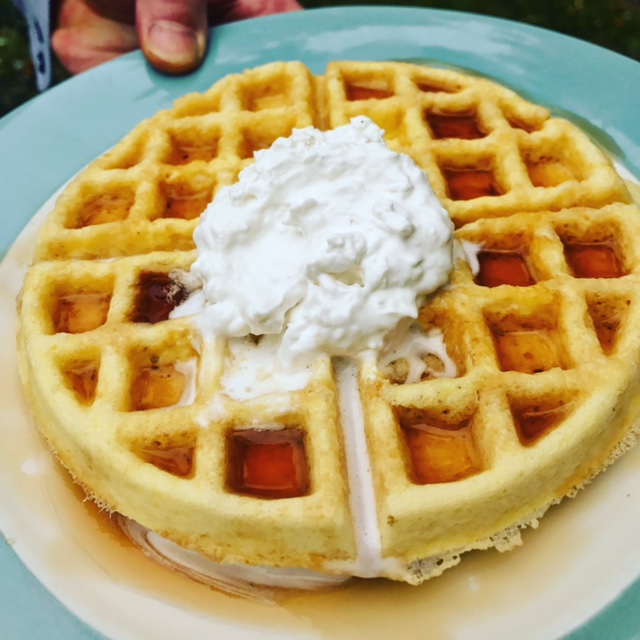