This time-honored recipe is handed down from Chef Bill’s late, great Father, Henry Duckman, a Russian Jew decended from a long line of expert Latke-makers. And trust me, if anyone knows how to do justice to the potato, it’s a Russian Jew. Henry’s recipe is simple, absolutely delicious, and chef Bill amended it to be gluten-free.  Chef Bill’s discovery last night:  they were even BETTER with the gluten-free bread crumbs.  The reason, he said, is the rice-based crumbs made the latkes taste and feel less ‘bready,’ allowing the subtle flavor and crispy texture of the fried potato to shine.

Henry’s latkes make a great side to a roasted chicken or, in our case, a slowly braised pan of short ribs.  Throw in a side of sauteed spinach or roasted Brussel sprouts, and you’ve got a clean, delectable winter night feast.  These latkes are also absolutely fabulous in the a.m. with eggs!  If you have leftovers, simply reheat uncovered in an oven no higher than 300 degrees until warmed through.  They should crisp back.  Serving latkes with condiments is a matter of personal preference.  I’m such a potato lover, I don’t want anything but a shaker of salt coming along for the ride.  If you love them with applesauce or sour cream, I’d say go for it, but try some whipped, room-temperature chevre as an alternative for the cow dairy.  Another way to enjoy these is this Borscht Belt favorite, also known as the Jewish Timbale:  top a potato latke with a slice of smoked salmon and a dollop of whipped, room temperature chevre, and sprinkle with fresh or dried dill – DIVINE!

Put grated potatoes into colander and squeeze as much liquid out as possible (use clean dish towel or paper towels to absorb water from potatoes). Transfer potatoes to large mixing bowl.  Combine remaining ingredients in bowl and mix thoroughly. Don’t be concerned if potatoes discolor, it’s normal.

In a deep frying pan or skillet, heat an inch of light olive oil (not extra virgin) or grapeseed oil to aproximately 325 degrees. Using hands, form mixture into balls about twice the size of a golf ball. Very slowly and gently, set potato ball into the hot oil and immediately flatten into a latke pancake with metal spatula.  Cook until crisp and golden on bottom and then flip carefully, hot oil may splatter. Cook until golden brown and serve immediately.  If there’s any lag time in serving the latkes, place them on a platter in a warm oven so they stay crisp. Do not cover as they’ll get soggy. Bon Appetit and Happy Festival of Lights! 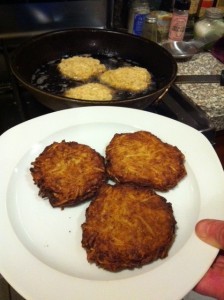 These are as easy to make as they are delicious – I like these better than French fries. 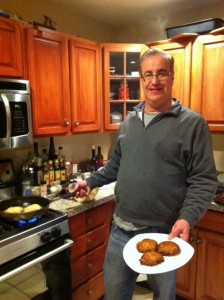 My Jewish King…and his masterpiece.

By Stacey Morris
0
The Building Blocks of a Clean, Delectable Thanksgiving Dinner
One of the Best Accents Ever!