…well it’s not really a requieum, but a last-minute dessert I whipped together today in an attempt to ward off the despair that mounted with the sleet as it clicked against my window. The dessert involved baked apples…more on that in a minute.  I made the baked-apple-choice after grappling with the idea of downing a gluten-free cupcake (piled high with tufts of butter cream frosting, it’s one of my favorite occasional indulgences). The problem was, I just had a gluten-free cupcake yesterday.  Usually when I give in to the desire that’s the end of it for a while, and weeks go by until another cupcake craving comes a knocking.  I knew the ‘just do it’ voice in my head urging me to reach for another one in less than a 24-hour span was the perfect barometer that I was feeling a little off.

The thing about emotional eating is it’s not always rooted in crisis or high drama. Today, feeling bummed about the lousy weather was enough of an impetus to have me contemplating relief via my tastebuds. And that’s not always a bad thing…it’s actually a healthy and human thing to do.  I just know myself and my limits and could see things insideously creeping out of control if I didn’t do a little negotiating. Yeah, I was hungry…and I wanted something sweet.  But it was so freakin’ cold and bleak out, I realized the overriding sensation I wanted to experience was warmth. So I preheated the oven to 325 and proceeded to assemble the following:

Layer in baking dish as follows:  apricots (they will be so plump and juicy when it’s over you won’t believe it!); apples; cranberry sauce. Bake for 30 minutes.

One very important ingredient:  a Cazuela.  There’s something magical about these baking dishes. The fact that they’re lead and chemical free is a big plus. They’re also made from clay harvested from riverbanks in the south of Spain.  It all makes for a constitution that affords flawless baking.  Mine looks like nothing more than a terra cotta plate…the kind that go underneath terra cotta planters to catch excess water.  Its plainness is deceptive. It comes with no lid, yet everything I’ve ever baked in it is fork-tender and moist.  Don’t go looking for Cazuela’s at Wal-Mart.  Try import or specialty stores. Mine come from Hamada Egyptian Bazaar in Saratoga Springs.  They come in varying sizes. Give the owner Mohamed a shout…he will hook you UP!  http://www.hamadaegyptianbazaar.com/info.html .

If you decide to take up the art of Cazuela-baking, let me know how it goes. In the meantime, Bon Appetit!  And please excuse the photo quality. Took them circa 5 p.m. today and daylight was long gone.  Here’s to baking away the winter blues… 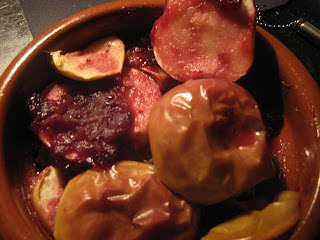 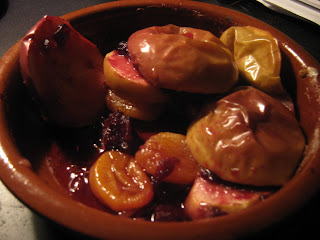 By Stacey Morris
0
The Joys of Honey
YRG Radio TONIGHT!