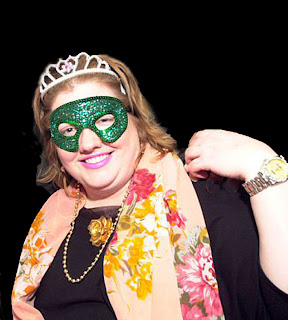 Two friends and the e-mails they sent last week inspire this entry.  My friend Joan (also an amazing photographer www.forwardvisionphotography.com) was digging through her archives and sent over this Mardi Gras photo which sent me back to 2003 when I was waist-deep (at least) in denial. And not just over my size…that was only the beginning.  I put lots of energy into looking anywhere but in the direction of my present reality.  Specifically, I didn’t want to look at or deal with in any way two things in my life which really needed immediate attention:  a career that centered around a stressful, negative, and emotionally debilitating work environment, and a 15 year relationship that had dragged on for about 14 years too long.
My conscious mind was glib about the whole thing, playing its usual smoke and mirror tricks that I could go on living the way I was, life wasn’t all that bad, I wasn’t all that unhappy.  But on a gut level I knew I was fooling myself. Not surprisingly, I often told my gut to shut the f*#@k up back then.  And wow did I pay a price. Not just in pounds, but in sadness, frustration, and a large part of my life spent being nearly lifeless.
I may appear cheerful in this photo but it was my smile, not the green rhinestone mask that was the real disguise. Looking back, this position of passivity, of being overwhelmed by my personal life, was a big part of why I gave up and accepted that I’d be 300 pounds + for the rest of my life.  I would need food to dull the pain.  If the pain wasn’t going anywhere, then neither was the food. And I made sure I had elaborate supplies of it at all times, just in case the anesthesia started to suddenly wear off.  It wasn’t the perfect plan, but it was the only plan I had for dealing with life and all its complexities.
And then Life (as it often, and mercifully does) pulled the rug out from underneath my carefully self-constructed comfort zone.  The job got more and more toxic, which turned out to be manna from heaven in the long run because I finally gathered the courage to permanently evacuate and never look back.  That was seven years ago and it was truly a turning point in my belief system, a declaration of what I did and didn’t deserve.
Now about the other half of that equation…I knew when I left the job at Misery Central I still had one more major stone to heave off of my chest, but I chose to marinate in denial for another five years, thinking that if I just looked the other way, I could get away with it. Life once again met me more than halfway, shifting the tectonic plates of my complacency and catapulting me into a face-to-face position with a mirror I could no longer look away from.  And the realization:  I was half alive at best, bound by the lies I was living.
The day after Joan sent me the photo of the ghost of Mardi Gras past, an e-mail from my friend Neal (an amazing writer) arrived that contained a reference to Lazarus being raised from the dead (John 11:44), and walking out of the tomb bound in grave clothes…even his eyes were wrapped in cloth. Neal and Joan had know way of knowing how amazingly their e-mails related to one another…but someone did.

In celebration of my own rising out of the grave that was once my habitat, I took some fresh Mardi Gras photos this year.  The physical changes are the most obvious, but I’m different in so many ways that will never be tangible, but I feel them.  In every moment of every day, I feel them. 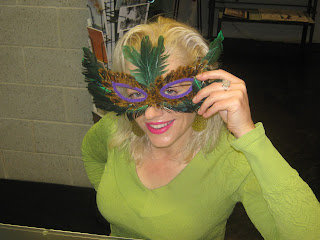 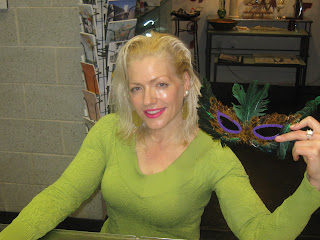