Anyone who says eating isn’t a major part of the allure of traveling either has paralyzed tastebuds or isn’t being truthful.  Or they’re simply the kind I’ve never been able to figure out:  dispassionate about food in a take-it or leave-it sort of way.

Never have I been afflicted with that particular brand of apathy.  I adore food and its varying temperatures, textures, colors, aromas, and flavors. Swan-dives into gluttony do me no favors, though.  And my body knows the difference now. It doesn’t enjoy being drugged anymore (actually, it never did, but it took a while for my mind and spirit to catch up).  Also, I’m not a grateful wearer of denim, and we all know how little wiggle room there is where that iron-willed fabric is concerned.

At the same time, what’s the point of travel and adventure if I eat exactly as I do at home?  I love eating clean (no gluten or cow dairy) but when I’m on the Open Road, I tend to take in both the sights and the culinary wonders. Gluten, because of the way it bloats me and saps my energy, is avoided at all costs.  Besides, even on the road there are rice, potato, and corn options in abundance.  I make the occasional indulgence back into the realm of dairy, but it really has to be worth it (superior quality, imaginative presentation).

During the past month I’ve had back-to-back trips to Florida, Wisconsin, and Alabama. And I realized, as I had to tug a little harder to get my denim pants situated around my waistline the other day, that it was time to dial the indulgence back a few degrees.

In my quest for better health and living with more clarity, I’ve dropped 180 pounds along the way.  And put a few rules in place from both ends of the spectrum: eating will be done for both pleasure and nutrition, and not to sledgehammer the living daylights out of unpleasant feelings. No food is off limits, but yes, Virginia, quantity does matter.

For example, last week at a seafood restaurant overlooking Mobile Bay, I knew before seeing the menu I’d be getting in one of my top ten favorites:  fried seafood.  But I ordered two vegetable sides with it and told the waitress to hold the fries.  Anytime a menu has lentils (whether it’s chick pea salad or black beans and rice) I order them for the fiber more than anything else.  Salads as appetizers are a no-brainer. And my secret weapon?  A steady stream of hot water or herbal tea throughout the meal.  Anyone who has ever washed dishes by hand knows the mighty power steaming water has over a greasy plate. 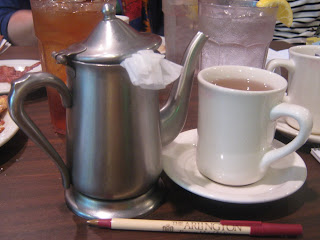 These are all tricks I employ to make crossing over to the other side a little less impactful.  During the past month I’ve moaned with pleasure over velvety crawfish bisque, a fluffy and decadent square of Tiramisu, Seafood Eggs Benedict (minus the English muffin), and Oysters Rockefeller.  I enjoy it all with appreciation and awareness, don’t eat until I’m shaking my head with regret, and always leave something behind on the plate…a small but significant gesture that I’m in charge of the food, not the other way around. 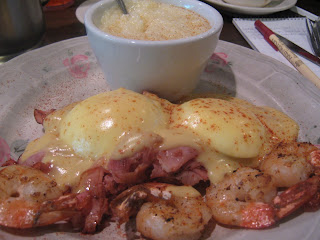 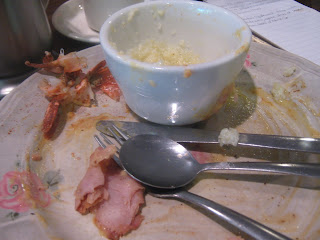 Always leaving something behind….

Inspite of the safeguards I put in place, it’s easy, amazingly easy, to let things slide when traveling.  Maybe it’s the combination of the adrenaline of new territory, the stress-charged atmosphere at airports, and edible temptation everywhere that collude to deceive me. And speaking of airports (where I’ve spent a lot of time waiting lately), I realized I’ve been subtly operating under one delusion in particular:  food eaten in airport terminals doesn’t count.  The calories exist in a hologram and don’t really have a consequence.  I’m in survival mode.  I need a little extra comfort before the flight.  The rationales are endless.

Last night on my way home from Mobile, Ala., I made a decision that meant my waiting time at the airport would quadruple:  I volunteered to get bumped from my flight in exchange for an irresistible travel voucher that equals a free plane ticket.  Instead of arriving home at 6:30 p.m., it would be 11:30 p.m.  As I signed on the dotted line I felt the siren call of wanting comfort in the form of food beginning to wail.  Then the ticket agent slid a meal voucher across the formica. All around me were fast food joints pushing burgers, tacos, sweet and sour pork, fried chicken, obscene cinnamon buns as mammoth as they were overly sweet, and ice cream (are you aware there are now cones made of cake?).

Believe it or not, with all the gorgeous fruits of my New Life, there are moments that I get frustrated and infuriated that I can’t just dive back in…Sometimes I really do just want the sensation on my tongue….and the sedative effects of sugar and fat sliding through my body. Especially when I’m overly tired and missing home. Instead, I backed away from the food court, hopped on a moving floor and didn’t look back till I got to my terminal. Which mercifully had a smoothie stand that sold packaged fresh fruit cup.  Two containers of it were my dinner that night. I’d taken a stand against temptation and it felt glorious.  Why fruit cup for dinner?  I was virtually sedentary the entire day, and after a vegetable omelet and grits for breakfast, and nuts and dried fruit for lunch, I was hardly underfed.

There was more food I could have delved into in my back pack (my emergency supply of clean foods), but I knew it would have been mindless eating.  So I pulled out another form of comfort I keep for such emergencies (the latest Town & Country) and dove in.  My digestive track and denim pants both approved. 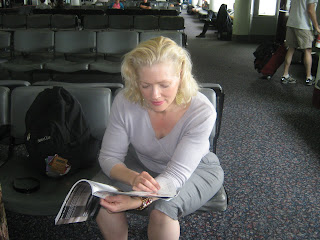 By Stacey Morris
0
First Mini-Dress!
Recipe of The Week