Yes, I made it the other day, a sweet, delicious mistake that was meant to be a sweet, delicious gluten-free bundt cake. Chef Bill crafted the batter, adapting his favorite chocolate cake recipe from an old Food + Wine issue. It called for no milk so it was already on its way to being clean. Then he used fava bean flour and a dash of xantham gum in place of the all-purpose flour called for and viola – a fabulous from-scratch chocolate cake!

One little problem – it got overbaked. To the point of it being borderline crispy. Since I’m one who relishes cake when it’s soft and spongy, I felt a tinge of despair coming on, but immediately banished it with my brain going into overdrive to figure out a method of salvation. The solution couldn’t have been easier and I now have an amazing dessert recipe in its own right. To make this, you could either deliberately overbake a cake or use cake that’s past its prime, though that has to be a rare, if unheard of phenomenom, don’t you think? How many people actually let chocolate cake sit around the kitchen and go stale?

Here’s the recipe – hope you try and enjoy. This could also work with vanilla cake. If you don’t have a jar of sour cherries, dump your favorite marmelade into the mix instead. Some of my best discoveries in the kitchen are borne of either accidents, or playing around with what I have in the cupboard. Bon Appetit!

About half a gluten-free chocolate bundt cake (made from scratch or a mix) cut into large cubes.
1 can of coconut milk
1 jar of pitted sour cherries, including juice 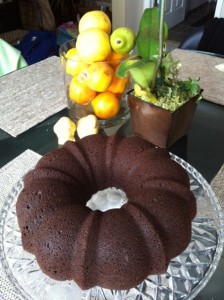 Looks great on the surface… 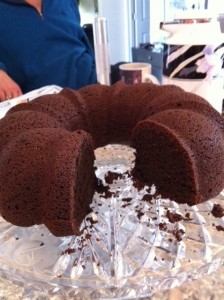 Place the cubed chocolate cake in a sprayed casserole dish. 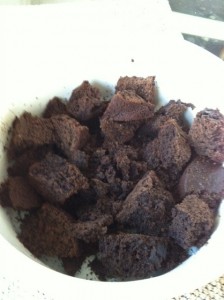 Pour coconut milk and jar of cherries in a non-stick saucepan and simmer on medium heat, uncovered, for 30 minutes, stirring occasionally. 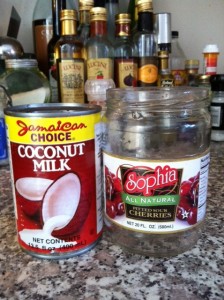 The wet ingredients…they emulsify the pudding 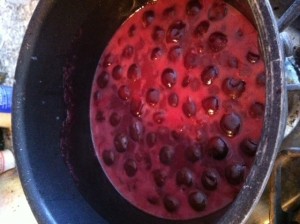 Don’t judge a book by its cover…keep going…

Preheat oven to 325. Pour half the cherry mixture over the chocolate cake. Puree the remaining half with an immersion blender or in a food processor or upright blender. Pour pureed mixture over the cake, stir or press with a spoon so most of the cake is soaked with mixture. Some dry pieces may poke out at the surface, that’s fine.

Bake for 25 minutes and serve warm or at room temperature. 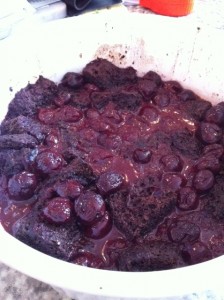 Sweet-Warm-Chocolate…what could be better?
By Stacey Morris
0
One of the Best Accents Ever!
The 61-Year-Old-Goddess