I may be middle-aged, but I’m not anywhere near the home-bound stage. I live, however, in the Adirondacks which means this time of year, being home-bound is sometimes a reality. Yeah, I could have gone out, but when it’s all of 11 degrees out, it’s just not very enticing.

And not surprisingly, I could feel the mercury rising on my desire to eat. I wanted comfort from the frigid winds seeping through the windows, relief from the restlessness of not doing a six-mile walk, and a release from the frustration of not being where I’d rather be at this particular moment: soaking in 70-degree turquoise waters off the shores of Aruba.

Today was one of those days where, had I been in that state of permissiveness I used to live in constantly, I would have had it all. I would have eaten it all. Anything in my path, in my line of vision that looked appealing. Until I could no longer sit upright comfortably. And then, with the pleasure part of my trip over, I’d sink a little deeper into the couch as I realized those pre-existing emotions mentioned above hadn’t been alleviated…they still jabbed at me, coupled with that dreadful feeling of chemical overload every overeater is familiar with.

So here’s how I handled it instead: It was one of those times that comfort from food was in order. It’s not that my encounters with food usually aren’t pleasurable…that’s why we eat, right? But there was an S.O.S. quality to this one. There was a part of me that wanted to make like a Hoover and drain the cupboards dry. So I took a good look out the window, shook my head at the dreary landscape and acknowledged (rather than shove underground) that I was feeling the winter blues in spades. 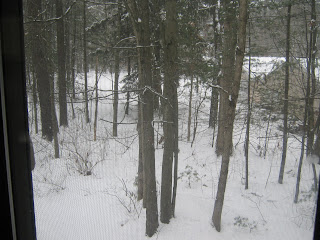 Then I reached for an eggplant. Salt and fat get me way more excited than sugar, and I knew the time for a batch of Eggplant Latkes had arrived. God they were good! Hit the spot, augmented lunch perfectly, and I didn’t feel drugged, bloated, and dazed when it was over. Still not thrilled that it’s only January 3 and winter has only just begun…but at least I didn’t compound the problem.

1 large eggplant, cut in half lengthwise
2 TBS. Rice Flour (tapioca or chick pea works also)
3 tsp. Zataar
Salt to taste
Grapeseed oil (perfect for frying because of its high smoking point. If you don’t have any, use light olive oil, not extra virgin)

Spray baking sheet with non-stick cooking spray and place eggplant face down. Bake at 300 for 30 minutes and turn oven off. Leave eggplant in an let cool for 15 minutes. When eggplant has become cool enough to touch, scoop out the eggplant’s flesh with a fork into a mixing bowl. To get it all, use a knife to scrape at the end. Add flour and Zataar and mix thoroughly with a fork. Heat oil in a frying pan over medium to medium high heat. Use enough oil to cover bottom of pan. Drop eggplant mixture by the spoonful, making tiny pancakes (a bit bigger than a silver dollar). Fry for about 5-7 minutes on each side or until crisp. Flip and repeat. Transfer to plate, sprinkle with salt and serve immediately! Don’t you feel better now? 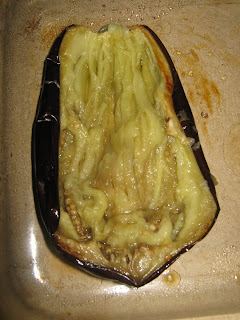 This recipe evolved quite by accident last month when I realized (after the eggplant was out of the oven) I wasn’t in the mood for Baba Ganooj. 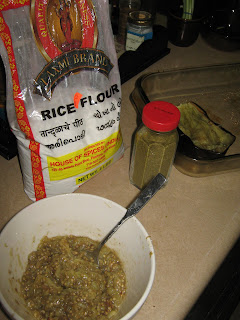 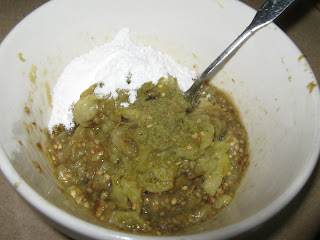 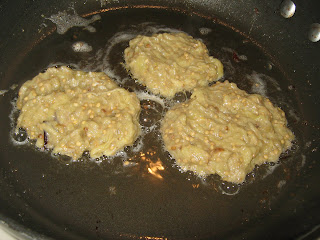 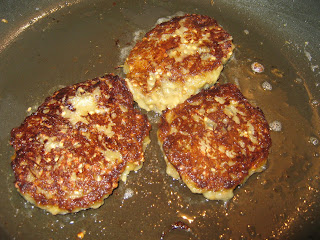 The Sweet Sound of Sizzle… 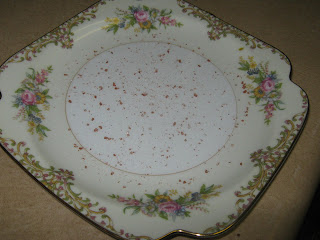 I do it a little differently: salt on the plate first… 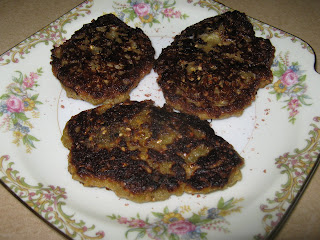 Crispy perfection. Just salty and decadent enough to make me happy, but minus a hangover.