In my nearly seven years of eating clean, doing DDPYOGA, and in the process, dropping 180 unwanted pounds, I’ve learned a thing or two about food. Most importantly, it’s crucial to still enjoy it.  I do. How else could I have made it this far?  But balance is equally critical because, again, I ask:  how could I have made it this far? In my former life, I was either dieting or overeating. No middle ground. None.

Today, it is on a patch of fertile middle ground where I have pitched my tent. And right next to it I’ve planted a massive victory flag that waves triumphantly in the wind.  And since the New Me is here to stay, I’ve had to learn the fine art of choosing my battles, or in this case, simple carbs.  In other words, I’ve got to know when to hold ’em and know when to fold ’em. I have every intention of making Thanksgiving a gastronomic feast. I eat considerably more and considerably heavier on this day.  Why wreck the glory of it by inserting a dish or two that would be better suited at a spa?  That said, I don’t go wild either.

Case in point, the sample menu below.  It’s simple, yet rich. And because of that, I’ve chosen a clean green to cleanse the palate of all the fat and starch that’ll be gliding down the gullet that day.  I used to be enamored with the green bean casserole made with canned mushroom soup. Nowadays I fare better with a simple dish of sauteed string beans, a little olive oil, and a few splashes of lemon topped with slivered almonds. Every dish on here is gluten-free and mostly dairy-free.  I confess to baking and cooking on special occasions with heavy cream.  As much as I adore coconut milk, I don’t want the taste of it in mashed potatoes or creamed onions.  If heavy cream is off the list for you, substitute with a vegan creamer.

The cranberry sauce is made from whole berries and no white sugar.  It’s another delicious way to give the palate something else to grab onto and also cut through the gravy and butter. This may look like a small menu, but it’s simply reflective of my preferences.  I’ve done the 15-item Thanksgiving menus in years past and discovered we tend to gravitate to five or so favorites.  A tight list of all-time faves saves time, money, and sanity.

A CLEAN AND COMFORTING THANKSGIVING MENU

Below are recipes for some of the above.  As for the mashed potatoes, my secret is, boiling quartered potatoes in chicken stock instead of water. When they’re soft and fork-tender, drain liquid and add this delicious elixir known as melted butter and warm (NOT cold) heavy cream in increments as you blend with electric beater.  Salt and pepper to taste. As I openly admit, I use heavy cream (not milk) on special occasions.  Sometimes there’s just no other viable substitute.

Cranberry Sauce A La Helen Gurley Brown
Cosmopolitan magazine…circa 1988. It’s the last place I ever thought I’d find a usable recipe. But I did. And it was so simple, I committed it to memory in the confines of that sweat bath of a studio apartment I rented on the upper west side that summer.

There’s no sugar in this, which is amazing for a cranberry recipe. Use it any way you like: in yogurt, oatmeal, on ice cream, waffles. No rules. Except one: don’t under any circumstances leave the stove while this is simmering. You haven’t really cleaned until you’ve cleaned molten cranberry sauce off a burner. I’ve named this concoction in honor of the woman who (on some level) must have given it the green light:
Ingredients:
1 bag fresh cranberries
1 can frozen grape juice concentrate (100% juice)

Instructions:
Place both ingredients in a sauce pan on medium heat and cover. Cook about 5-10 minutes, or until it begins to simmer. Uncover and turn heat to medium-low. Let simmer for about 30 minutes, stirring occasionally. Let cool before serving or storing. Keeps for several weeks in the refrigerator. Months if frozen.

Instructions:
Heat butter or olive oil in large cooking pot. Dice vegetables in a food processor until fine. Add to pot, sprinkle with spices and stir to coat the vegetables. Cook until translucent or just starting to brown. While vegetables are cooking, dice the bread into cubes and preheat oven to 350. Spray a large casserole with non-stick cooking spray.

Pour diced bread into pot and add heated chicken stock. (I found that g-free bread absorbs a lot of liquid so don’t hold back) Mix thoroughly and transfer to casserole. The stuffing shouldn’t look dry. If you can’t see any liquid, add some more (unless you like dry stuffing). I added enough liquid so it filled the casserole dish almost halfway. Cover and bake for about 30 minutes.

From experience I can say, it’s great to be able to enjoy stuffing and not feel sedated and bloated.

Chef’s note: for those who like their gravy very thick, have at least two ‘gravy thickeners’ on hand. Recipe: approximately 1 tablespoon of corn starch or potato starch mixed with 1/8 stick of butter or 1 tablespoon of oil, and rolled between your palms until it becomes a ball. Refrigerate until ready to use. If your gravy doesn’t come out as thick as you desire, whisk 1 chilled ball at a time into the gravy until desired thickness is achieved.

Gravy ingredients
Note: you can either use turkey stock made from boiling parts, or have two quarts of boxed turkey stock on hand and heated.

Approximately four pounds of smoked turkey parts, available at most gourmet grocery stores or smokehouses
Half-stick of unsalted butter or 3 tablespoons olive oil
3 generous tablespoons of corn or potato starch
11/2 ounces brandy or cognac
1 tablespoon browning sauce such as Gravy Master or Kitchen Bouquet
1 tablespoon chopped thyme
Salt and pepper to taste
Instructions:
Boil the turkey parts boiled uncovered in about a gallon of water with an onion and carrot until water is reduced to about half (about two hours). Remove turkey parts from liquid and strain through a colander. Chef’s note: meat from turkey parts may be removed, chopped and added to gravy, or put in the roasting pan with turkey for extra parts.

In a large Dutch oven, heavy sauce pan, or wok, melt butter (or heat oil) over medium-high heat, then whisk the potato or corn starch until it becomes a roux (thick, creamy paste). When roux begins to bubble, turn the heat down to medium. Slowly ladle in warm stock and whisk briskly. Keep ladling and whisking until stock is depleted and the gravy thickens. If stock is depleted and gravy is not to desired thickness, see chef’s note above.

Just prior to serving, whisk in the browning sauce, cognac, thyme, salt, and pepper. Serve immediately.

Instructions:
Place cauliflower in large sauce pan. Add enough water to just cover bottom of the pan (essentially you’ll be steaming the vegetables). Sprinkle with salt. Add chopped scallions, sprinkle with a little more salt. Cook covered over medium-high heat until water reaches a boil, then turn heat back to medium and continue cooking for another 10 minutes, or until cauliflower is fork-tender. Turn heat off and sour cream or yogurt. Cover and let the heat from the vegetables work through it for a few minutes. Then puree everything with an immersion blender or in a food processor.

Instructions:
Preheat oven to 425. Spray muffin tins or popover tins with non-stick cooking spray and place in the oven for at least 10 minutes while mixing batter.

Place all ingredients in a large blender or Vitamix. Blend for 10 seconds and no more (it’s important not to overbeat the eggs or the popovers won’t rise).

Carefully remove hot pan from oven. Ladle or pour batter into muffin cups till cup is ¾ full. Bake for 25 minutes then reduce heat to 350 and bake for another 10 minutes. Popovers should be golden brown. Serve immediately. 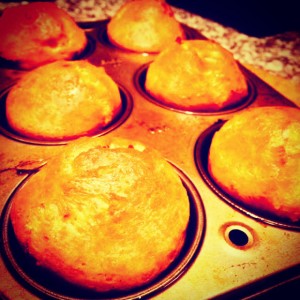 Dessert
Given the nature of the meal, I prefer lighter desserts on this occasion.  When I’m smack in the middle of digesting copious amounts of turkey and carbs is not the ideal time to send down a slice of flourless chocolate cake as a chaser. Sometimes I’m too full for a dessert, but if you’re big on it, you could give a Crustless Pumpkin Pie, or Fruit Cobbler a go.  Served with a small scoop of Almond or Coconut-milk based ice cream and you’ve got a dazzler.  Often at the end of any dinner, if I’m truly craving a sweet, I’ll have a small piece of dark chocolate and let it melt slowly in my mouth.  It totally does the trick.  Every time.  But if you’re of the belief that a pie just isn’t a pie without a crust, below is a recipe for a gluten-free pie crust, courtesy of Team DDPYOGA member Diane Bender, who adapted it from a Libby’s Pumpkin Pie mix label.

Instructions:
Combine rice flour, potato starch, tapioca flour and salt in medium bowl. Cut in butter with pastry blender or two knives until mixture is crumbly. Form well in center. Add egg and vinegar; stir gently with a fork until just blended. Sprinkle with water; blend together with a fork and clean hands until mixture just holds together and forms a ball. (Be careful not to add too much water as dough will be hard to roll.)
Shape dough into ball and divide in half. Cover one half with plastic wrap; set aside. Place remaining half on lightly floured (use rice flour) sheet of wax paper. Top with additional piece of wax paper. Roll out dough to 1/8-inch thickness. Remove top sheet of wax paper and invert dough into 9-inch deep-dish (4-cup volume) pie plate. Slowly peel away wax paper. Trim excess crust. Turn edge under; crimp as desired. Repeat with remaining half.

Bring water to a boil and add cornmeal, salt, sugar, vanilla, and oil and whisk vigorously. Reduce heat to low and continue whisking until mixture is thick.  Turn heat off and whisk in coconut. The cornmeal should be porridge consistency but not runny. If too thick, add a bit of hot water.

Sparkling Clean White Russian
And then there’s the other option after a voluptuous menu:  a liquid dessert. Here is one Chef Bill invented recently, after deciding that I’d been deprived of White Russians long enough. No holiday is complete without a little libation – enjoy!

Pour all ingredients in a cocktail shaker with ice.  Serve strained or on the rocks.

By Stacey Morris
0
Sweet Victory: My Dessert Cookbook is OUT!
Eat AND Drink The Rainbow! 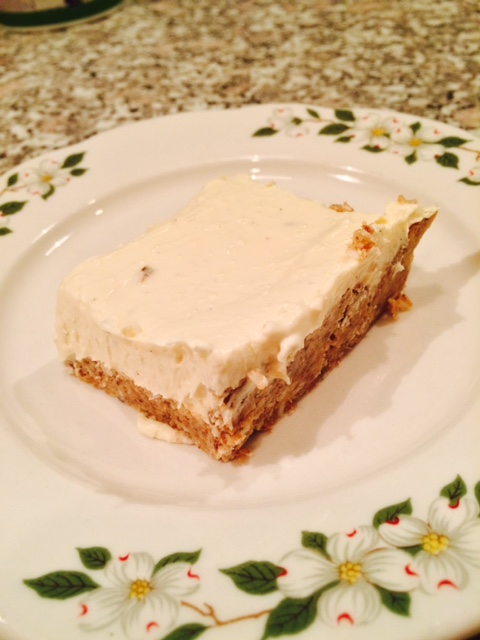 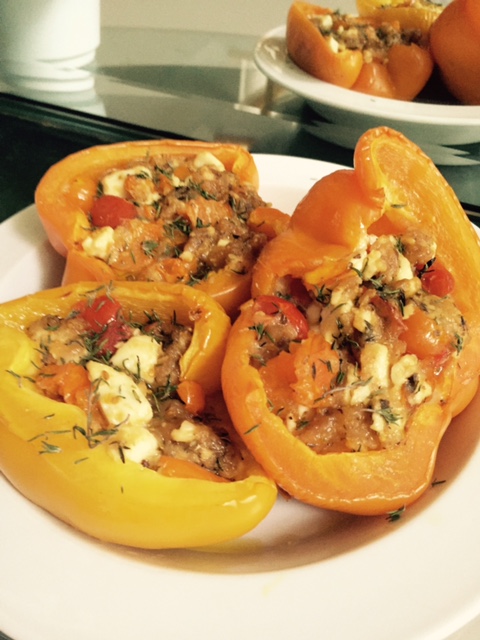